WHY ARE WE HERE? 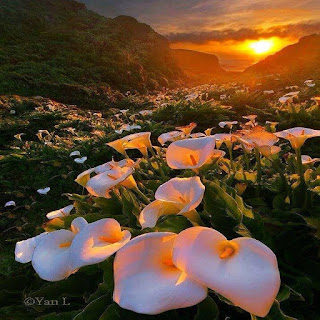 How does resurrection relate to you and me?  We must first recognize that each element within our physical, emotional and mental body must rise in order to manifest the light-body form.  The physical being doesn’t handle the transformation.  It is our own consciousness as a spiritual being that has the capability to achieve an expansive and advanced working light-body.  I feel this is our purpose in living here on earth. When one achieves his destiny, he helps the entire race and planet.  When we raise our own elements it has a domino effect on all life forms and intelligence.  It is a coordination between the inner and the outer that has not been witnessed on earth since very ancient times.

What I am suggesting is that we can rise above the elements of our baser third dimensional body transmuting it by consciously working, expanding and lifting consciousness.  I have been consciously aware and fully in love with the Holy Spirit since its descent in my life 45 years ago.  Could it be that through our unswerving love and compatibility with the creative power of the Holy Spirit that we eventually transform the lesser sense of self into the magnificence of the High Self?  The presence of the healing power continually displays Its magical touch during healing sessions.  If it successfully removes cancers, changes the position of bones and much more, it will demonstrate even greater things when we choose to transmute the physical form as we willingly lift and focus our mind and heart on the Source of our being.

I refer to the highest body form, the light-body as the Diamond Body.  The Diamond Body is locked into our hard drive.  From my understanding and experience, the Holy Spirit is the creative energy that helps us with the chemical metamorphosis. Creative Intelligence is activated; transformation occurs when our consciousness is enlightened and a channel for Divine Mind.  This is my realization as to what actually is our true identity and purpose.  Our goal is to become a conscious immortal.  Few people realize they have the diamond presence within or the ability to change the caterpillar form and consciousness into the beauty and freedom of a majestic butterfly.

In harmony,
Shirlee Hall
http://www.behealedforever.com
3-27-16   Easter
Posted by Shirlee Hall at 7:12 AM No comments:

Email ThisBlogThis!Share to TwitterShare to FacebookShare to Pinterest
Labels: carbon based body, chemical metamorphosis, diamond based body, resurrection, Why 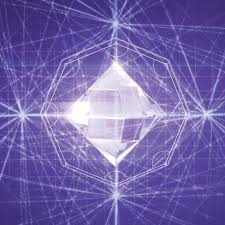 Several years ago while sitting in the living room with a friend, a sacred geometry figure of an octahedron appeared big as life and floated toward and around me for several minutes.  We were not meditating.  We were talking.  Knowing through firsthand experience that sacred geometry is one of the ways that masterful beings in the subtle worlds of Light communicate.  I paid close attention.

The geometric symbol represents the harmony or merging of the higher frequencies/dimensions of Light with the denser frequencies of physical matter as we commonly know it.  Heaven and Earth as one cohesive unit of energy.  This is the purpose of life in matter...the two becoming one.  Sadly enough, I didn't realize at the time that there was more that I needed to know and do regarding this important symbol.  Can you imagine the appearance of an object this size floating in your room?  The octahedron, a diamond shaped symbol, was a message suggesting that I examine its meaning...I did not at that time.  For some of us it may take a couple of messages before we finally awaken and realize that we must take seriously what is being either said or shown.

A few years later, another experience occurred in my bedroom shortly after I had turned off the light.  A well known master teacher who was no longer in the flesh appeared to me.  He appeared in his Diamond Body.  A Diamond Body is an immortal form, the highest vehicle our consciousness can achieve and actively use.  He was so brilliantly beautiful and I so stunned that I immediately left my own physical body and joined him to learn further the significance of his appearance in an indestructible body.

As a result of these two experiences, meditations and research, I created another Sacred Breath Healing Workshop which was offered last night for the first time.  You see, the goal of the soul here on earth is to eventually transform our earthbound carbon based bodies that become diseased, decay and die into the glorious and indestructible Diamond Light. When we eventually evolve and vibrate in the clear, compassionate diamond light level, we have reached the stars and will naturally vibrate and manifest harmony and beauty, purity and truth.  We have gained mastery over matter and are pure to our very core.  I plan to continue to offer this new workshop because the Diamond Light is the sacred heart of what we truly are~

Much love is sent your way...

http://www.behealedforever.com
Would you like to help me self-publish my new book?
https://www.gofundme.com/hin9vg    BABA - A Magical Cat with a Message

Posted by Shirlee Hall at 8:38 AM No comments:

CAN WE BE FREE WHILE LIVING IN A PHYSICAL BODY? 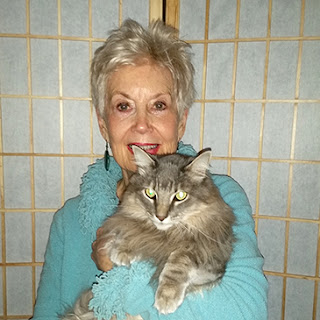 What human pets usually do not realize is that they automatically free themselves from dense matter when they sleep.  For instance, the other night Mama Shirlee was on her back meditating.  I was sleeping curled up by her left foot.  All of a sudden she saw me walking up her body and ready to sprawl across her chest.  Since she didn’t want to be disturbed, her right arm suddenly came out and gently pushed me off the bed where I landed on the floor near the right side of her bed. Immediately afterwards, she surprisingly felt me still curled up sleeping by her left foot.  How could that be? I was on the floor.  It happens all the time.  Regardless of specie, we escape our dense form when we sleep.  Some humans can go out of the body when meditating or other special circumstances.  She has had proof over and over again that we have multiple forms, each finer and less dense than the previous one.  Mama Shirlee once had a friend who would refer to his energy package as “Me and my six pack”.  We are always free to travel within dimensions but usually do not remember.  Similar evidence is shared repeatedly in remote healing appointments.
Last Wednesday, a friend out of state had an appointment with us, yes; she asked that I be part of the healing session.  This is what happened.  I was sitting on Mama Shirlee’s lap during the remote session in a state of bliss.  I left my physical body and visited the client and sat on her lap.  She actually saw my astral form sitting on her lap reaching up with my left paw touching her face.  The woman was so happy she had tears of joy.  I feel she also picked up on the sweet energy of a little song Mama Shirlee was softly singing during her healing treatment.  By the way, my human pet normally doesn't sing.  Here is the main verse: "Holy Spirit I appreciate you.  Holy Spirit I appreciate you.  I love you, I adore you, I bow down before you, Holy Spirit I appreciate you."

Her departed cat also showed up in his astral form.  Besides our company, she began to see swirling golden light.  The light began taking shapes like diamonds.  First there was one large diamond, then smaller ones and then the large one again…all swirling.  Beautiful!  Mama Shirlee had been suggesting days earlier to our client that she begins to view herself as perfect body similar to a brilliant diamond.   Our true Self uses a higher energy form in special moments to remind us how perfect and beautiful we really are.  She knows this as true because she has had firsthand experiences with the diamond bodies of spiritually evolved people who have passed on.
The healing energy must have traveled throughout our client’s home.  Her dog, Ringo, had had surgery the day before and he came out of hiding and actually laid down next to his human pet when she began to prepare for the influx of healing energy.  After the session, he ate his first food since he was in the hospital. To be free is to know that what we hold in our mind and heart is what creates our freedom. We were thankful to be in our bodies both in the seen and unseen frequencies of love and light.

Would you like to help me publish my new book?

Posted by Shirlee Hall at 7:58 AM No comments: